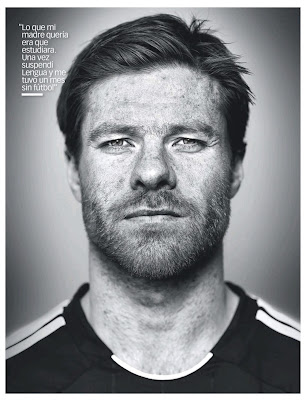 1. On the stove… I’m a limited chef, an interested kitchen boy and a grateful dinner guest. I like things made with love. When I go up to Donosti, I get together with my group of friends and we prepare pork chops with piquillo peppers or suckling lamb.

2. A sandwich with Nocilla (a chocolate spread) or chorizo (a type of sausage)? I’m from the generation that makes sandwiches with Nocilla and chorizo from Pamplona.

3. A childhood memory associated with food: the macaroni with tomato and hard boiled eggs that my grandmother Mertxe made in her house in Tolosa.

4. Being the son and brother of footballers: in our house, my mother was in charge, so we couldn’t speak so much about football. In Euskadi, women are in charge. And what was important to her was that we study. One time I failed a language exam and I couldn’t play football for a month.

5. Living in England: in Liverpool, I learned how to face problems that I had never even imagined. The people there are accustomed to fighting for what they believe, and this character infects you. I felt very good there.

6. First memory of a World Cup: Italy 1990. Míchel’s hat trick and then Stoijkovic’s goal, the elimination.

7. A secret to living with fame: I don’t let it condition my life. Some years ago, in Mexico, I met an Mayan Indian who had just had a child, and he gave him the name of the player he considered the best in the world: Xabi Alonso! Just like that!

9. A musician: when I was younger, I loved Nirvana. Now I like Sabina, Calamaro, the Beatles, Neil Young, Tom Waits, Coldplay, Loquillo…

10. Mourinho: demanding and hardworking, he’s on top of everything and is very detail oriented. He’s the boss.

11. Cristiano Ronaldo: he’s super ambitious, he always wants to improve, very professional. He’s the type of player that you want to play with, since he makes you better. As a person, he’s very normal, simple, and he’s always thinking about football.

14. What you value most in a woman: the personality.

15. Your biggest extravagance: that’s not me. I don’t like to splurge.

16. What do you bring to the concentraciones? My laptop, but I don’t surf the Internet very much. I use it to watch movies.

19. The beach or the mountains? There’s time for everything.

20. Botellón or copazo? I love champagne.

21. When I retire from football, I want to be… I haven’t planned anything yet.

22. A thought about the Eurocopa: it’s a very difficult challenge. Other teams know us better now and the circumstances and conditions are going to be very different than they were in 2008.

25. A movie: Casablanca. I have to re-watch it once in a while because it’s a masterpiece.

26. The worst hit of my life: the one De Jong gave me in the World Cup final was very painful. My entire back and waist area cracked. I was in pain for four days. Since it happened in the front, there were no marks, but it was the kick that injured me the most in my life. However, on television, it looked worse than it was.